So today the great baking and book jamboree that was Playing By the Book's Edible Book Festival draws to a close. If you haven't been to gawp at the entries do stop by; there's some crackers. At the time of writing the winners remain unannounced, however it seems unlikely that our scruffy butter iced renderings of severed heads and putrifying flesh will emerge triumphant.

Yes, we EXCLUSIVELY reveal ourselves today as the creators of Hilaire Belloc and Mini Grey's dismembered Jim and lion in cake form. This will not come as any surprise to regular readers who know that it is a bit of a fave for performance in the house. 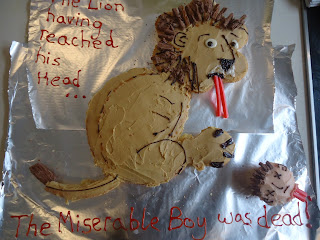 We particularly enjoyed rendering spinal cord out of strawberry bootlace. I am immodestly proud of the guilty expression of the lion as he hoovers it up. Bill enjoyed eating decapitated Jim with worrying relish.

Our second entry related to a much newer book; 'Monster and Chips' by David O'Connell. Bill is drawing like a fury these days. What he draws is almost exclusively crazy featured people who are either in the middle of or about to commit acts of violence on other crazy featured people. I am very partial to them. He's not quite ready to draw his own comics yet (he tends to wander off after the first panel) but it's probably only a matter of time.
To encourage this enthusiasm (and to allow Eddie and me to enjoy the gentler pleasures of bunny brothers- more of which next post) I signed him up for David O'Connell's comic workshop at the Imagine Festival in half term. We also picked up a copy of the book there and Bill read it on the tube all the way home, letting out gratifying throaty chortles at regular intervals.

It's a simple tale of the pleasures and dangers of embarking on a career in monster catering. Joe; an ordinary boy, finds a portal through to Fuzzby's Diner in a parallel monster universe. The genial Fuzzby, who is very large and very green and furry, takes on Joe as washer upper and sous chef where he learns to create dishes such as 'Mixed arthropod grill in phlegm coulis' or (my favourite) 'Battered Unmentionables'. Most importantly, however disgusting sounding the dish, all are served with their famous (and conventional) chips. Joe must learn to cook without being eaten himself and help unmask dastardly goings on at the Monsterchef contest.

It's enjoyable stuff, but what makes it most enjoyable are the illustrations throughout. I'd say it would be an excellent choice for the seasoned comic lover who needs confidence building to also enjoy books. I really liked the little footnote bottom panels where the cute potato-shaped Guzzelins give their perspective on the action.

So Edible books then. We could have tackled 'Fungal Infection Fritters and chips' or similar of course but on balance we went for the zombie cup cakes. Joe inadvertently creates these in the story and then is forced on the run only escaping through clever use of a vat of frog custard.