Martha and the Bunny Brothers: I heart Bedtime! 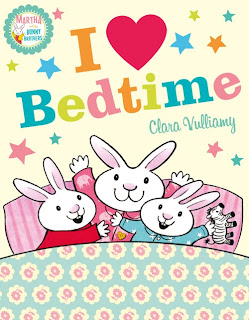 How excited are we to be part of the new Martha and the Bunny brothers book blog tour?Answer- REALLY excited!
Of course we are-Eddie became a Superfan of Martha within hours of Clara Vulliamy's first book about her happy bunny family entering the house. You may remember this post where it was only Martha's tight security that presented her being mobbed on stage by her small blonde stalker.
Last month, me and the boy attended Clara's  'make a Martha' workshop at the Imagine Festival; where we also got a sneak listen to this second volume. Advance copies were unexpectedly available to buy there. When Eddie saw the pile, it was a similar reaction to a One Direction fan chance meeting Harry Styles in the supermarket; he RAN to them, hugged a copy to him and carried on hugging it for the next three hours. He has good taste:

'I heart Bedtime' proves as toasty warm and cheering as its predecessor; 'I heart School'. Clara Vulliamy shows her usual skill in making these everyday milestones both safe and celebratory. They're packed full of delicious detail and, perhaps counter-intuitively, it's precisely all that lovely detail that gives them universal appeal. Nobody's bedtime routine and house and babysitter will be exactly like Martha, Monty and Pip's- but everyone's bedtime rituals will find some point of contact with theirs. And there seems to be nothing that children like more than identifying things that are the same as them and things that are different to them in a book. You would not believe the complexity of the conversations Eddie and I have had about toothpaste flavours since this book entered our house. She's a clever bunny that Clara Vulliamy.

So- Same but Different- a Comparison of Bedtimes between the Little Wooden Horse Brothers and The Bunny Brothers:

They both have fun at bathtime, despite the LWH bro's inadequate ear length for styling: 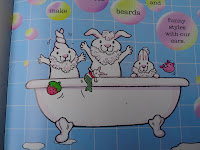 And most of all- they are CERTAINLY great fans of Best Gym- or Bill Fu as some household members prefer to call it. 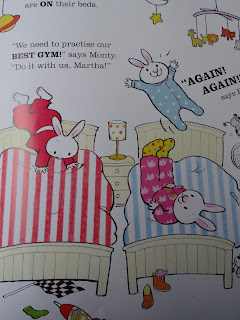 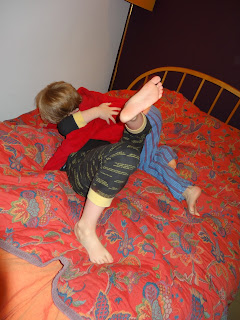 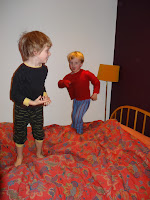 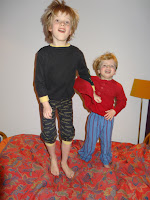 But of course the biggest difference between Bill and Eddie, and Monty and Pip is that the former have no Martha to show them the right way to go to sleep. Her patented method is to sing the Bedtime Bunny Song. To help impoverished Martha-less households like ours, I'm glad to say Clara Vulliamy has provided her own version for them to listen to here.  It's a rather lovely thing.
We can't achieve the same perfection but Eddie is learning...