'The Interactive Art Book' by Ron Van Der Meer and Frank Whitford is an updated reissue of an art pop-up book that first appeared in 1998. Although that is some years before I became a parent I can remember playing with a well-used 'tester' of that first incarnation of the book in the National Gallery bookshop and feeling a bit sad that I had no excuse to buy it. I am very glad to have a proper turn with it now.

It's a kind of hop around the history and processes of making art in seven crammed spreads of fun. It includes pop-up explanations of perspective, construct your own abstract sculptures, plenty of flaps to lift and optical illusions to explore. This may sound pretty gimmicky and superficial but there's surprisingly complex information, and lots of it crammed in between the fun. I really enjoyed the 'Stories and Puzzles' page for instance with its 3D peephole version of Velazquez's 'Las Meninas'. You get to view the picture both as audience and as painter and then read the story round the outside about the sub text of its composition.

Of course Bill and Eddie are really only about the fun at this stage; fighting over the 3D glasses and spinning the phenakistoscope. But I can see this is a book that we'll return to and get different things out of as they get older. At the back of the book is a whole other paperback activity book with suggestions for do-it-yourself art. Bill was completely taken with the cartoons of Gustav Verbeek reproduced in this section; which must be read one way and then turned upside down to continue the story back again. He also really liked the idea of pictures as detective stories with hidden clues that can be interpreted. A more informed trip to the National Gallery may be called for.

My own first introduction to art masterpieces as a child was through repeated playings of an obscure board game called 'Masterpiece' where you had to auction reproductions of National Gallery favourites without knowing what worth they had been assigned. An early, apparently respectable and intellectually nourishing version of 'Deal or no Deal'; it featured a good variety of Great Works including Da Vinci, Manet and Vermeer. You can tell it was from a more innocent time because as I recall (Austin Powers like) the absolute, most amount of money a painting could be worth was £1,000,000.

I'd like to say playing Masterpiece nurtured a precocious artistic appreciation in me but all I can remember is staring at the picture cards and wondering why on earth would ANYONE pay money for a boring old Turner or Rembrandt.
You grow into some things.

Hopefully 'The Interactive Art Book' will help the boys see the point rather more quickly. In the meantime they're definitely enjoying practising their upside-down cartoon skills. 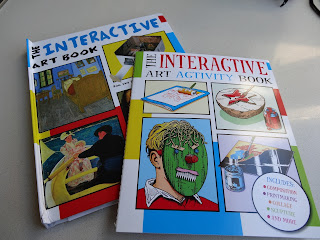 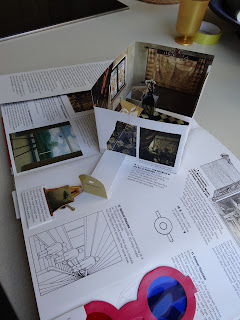 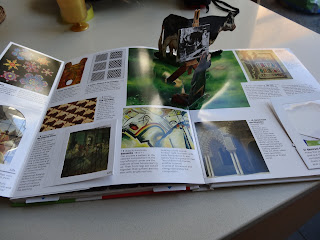 Disclosure: We were sent a copy of the book by kindness of the publisher. Our opinions are our own.
Posted by Polly at 16:21