This is the Way to the Moon

Another of the books that followed me home from the Nobrow shop and well timed because Zoe is hosting a space themed round up at Playing by the Book today. Hop on over if you need Space book tip offs- there's a great selection already building up (and I can't wait for the mini make-your-own book spin offs that will follow...)

M. Sasek's 'This is the Way to the Moon' was originally published as 'This is Cape Canaveral' back in 1963 and thus rather before anyone had actually found the way to the moon. This edition has been sympathetically expanded for a reissue since Sasek's death with additional illustrations by  Jessie Hartland which include an Apollo 11 footnote; enabling the slightly 'sexier' new title. I can see why they've done it but it barely seems necessary. The book reads as a charming period piece as it stands and it's not like bringing in the lunar landing makes it any more contemporary.

A friend remarked this weekend that the notion of going to the moon will seem as anachronistic to his kids as ocean liner travel and wind up wristwatches. I have to say its felt that way to me for most of my life anyway. This book, with its beautiful, intimate reproductions of 1960s newly space crazy America stands as a hymn to that bygone age.
M.Sasek's produced a series of travel guides for children throughout the 1960s and it's a great glory that they are currently being reissued. I have to say that whilst the London and New York ones have charm a'plenty there is an added layer of poignancy to this one somehow. With the last shuttle recently retired and (thankfully) the ending of the Cold War I suspect that Cape Canaveral may feel even more different to the 2012 visitor than four decades of change in London. Sasek's book is scattered with faithful versions of the proud signs that littered Canaveral. I like the grocery store with its motto 'Thru these portals walk the greatest missilemen in the world'.  Sasek's even handed commentary on the missile culture of Canaveral is a masterpiece of gentle but respectful eyebrow raised understatement. The model nuclear warheads display is reproduced with the heading 'A leaflet says:"The display lends itself especially well to family photography"'.

If this is all sounding more like a curiosity for the adult reader than an engrossing read for a child I suspect that might slightly be the case. On the other hand there is much detail beautifully expressed for any burgeoning space/bomb history nerd and a nice precis of the history of (US) space flight of the early 60s. Above all, as with all Sasek's books, it's a great combination of clear, non-patronising text and detailed whilst still idiosyncratic drawing all given space to breathe in an enticingly big and breezy lay out. Bill and Eddie have so far passed it over, but one of these days one of them will get their nose stuck in and drink it down appreciatively I'm sure. In the mean time I have it all to myself.

Space as our past rather than as our future. 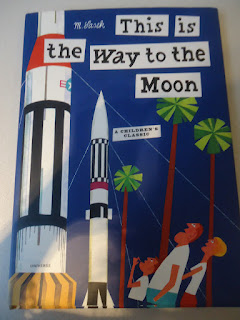 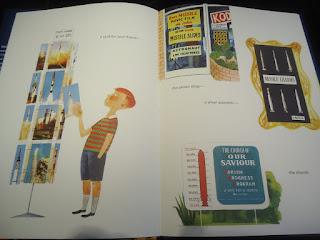 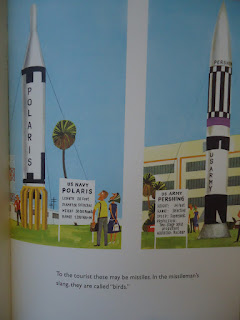 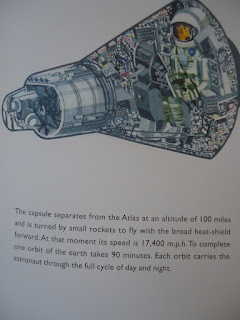