After seeing the torch run across the bottom of our street and the totally bonkers and wonderful Opening Ceremony featuring Friend's Daughter singing and signing National Anthem! Another Friend being Olympic Dove/Pigeon/Moth thing on Bicycle! (feel the bask of my tenuous reflected glory) we are in full Olympic fever here. It's in our city for real right now! That's pretty darn cool. Especially when you can actually hear the fireworks.

We have tickets for the women's fencing and the Greco-Roman wrestling of all things. We figured we should try and go and see some boy friendly (and mother friendly- tussling men in leotards after all)strangeness that we wouldn't otherwise encounter. We're also going to wander around the Olympic Park another day and go up the weird helterskelter Orbit.

London's Olympic bid was all about the 'legacy'; the chance to inspire sportsmen and women of the future; movingly demonstrated in the lighting of the 'cauldron' by unknown young athletes. And so I have been expecting my two, slight couch potatoes by inclination, to start becoming faster, higher and stronger any day now.

This morning I can announce The Household Legacy began. There was a full staging of the Ben 10 figure Olympics before we were even out of our pyjamas.

As constructed and photographed by Bill: 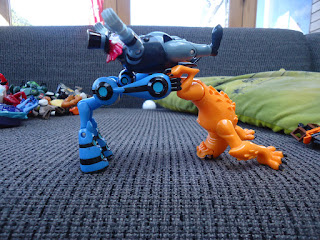 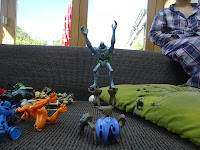 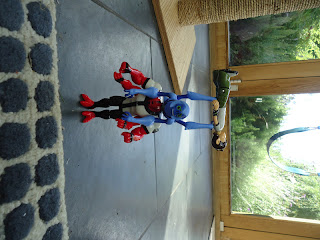 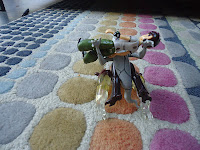 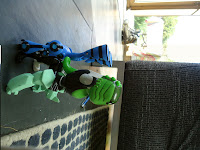 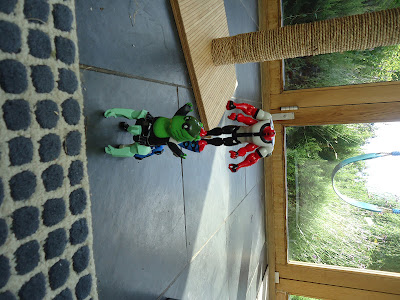 And here are my two hopes for 2024 waiting on the kerb for the torch eating cake shortly before their mother abandoned them to buy beer in the pub. 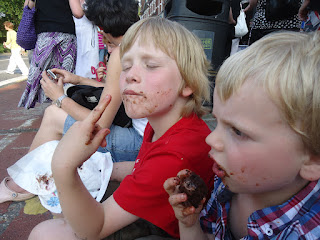 How proud we would make Seb Coe.

I know this blog is supposed to be about books. I could now tell you about either some of the Ben 10 books we own or our Olympic London 2012 annual- but I can't say any of them impress me much. I'm a big fan of trash reading but (particularly in the case of Ben 10 'readers') I can't bring myself to recommend these particular examples of trash. The fact that my head is on a continual loop of the Ben 10 theme song in Spanish (Eddie's latest YouTube find) or the Wenlock and Mandeville 'Rainbow' song does not mean I should inflict it on you.

Books will be back- but Olympics may be also. It is quite exciting.

Look Wenlock and Mandeville karoke! (DON'T watch it. DON'T. IT WILL NEVER LEAVE YOUR HEAD.)
Posted by Polly at 11:47