I'm roaming round the house mustering all the fairies I can. It's a task set me by the lovely Zoe at Playing By the Book who is hosting a link up of fairy and elf book posts on Monday as the first in her new monthly round up of titles on specific subjects: A great idea in principle; it will be a one stop shop resource to turn to when you're looking for inspiration in a particular area. The only problem is how few fairy offerings I can find.

Now as I am a Mother of Boys you may not find this as surprising as I do. Whilst it's true we dodge  the Rainbow Magic Fairies bullet and our picture book shelves are reasonably free of pink sparkles, both boys but Eddie in particular are big 'fairy story' fans. We have purchased several classic anthologies of traditional stories retold and I would recommend them all. We have 'The Hutchinson Treasury of Fairy Tales' and 'Quentin Blake's Magical Tales'. We have both of Joan Aiken's wonderful collaborations with Jan Pienkowski 'A Necklace of Raindrops and 'The Kingdom under the Sea'. We have Helen Cresswell's 'At the Stroke of Midnight' (now out of print sadly). We even have a rather wonderful ancient, inherited copy of The Brown Fairy Book by Andrew Lang: There are ten 'colour' books of these fabulous dense and comprehensive anthologies of fairy and folk stories, first published at the turn of the 20th century. Beautiful facsimile editions are available and I think they remain wonderful items for any (non- fairy) godparent to purchase as Proper Gift. But here's the thing about these and all of the preceding mentioned lovely books.

There aren't that many fairies in them.

Magical beings and entities abound, sorcerors, monsters, witches and goblins. Beautiful fairies adorn the cover but aside from the odd wingless godmother, fairies in the Tinkerbell/Tooth conception of them don't appear. In my mustering I came across William Allingham's famous poem; 'The Fairies'; the 'Up the airy mountain, Down the rushy glen, We daren't go a-hunting For fear of little men' one. I was struck by how dark it was. I suspect the sanitisation of the fairy into something benign and twinkly and exclusively female is a relatively modern phenomenon- perhaps even begun by J. M. Barrie and continued by the famous fake Cottingley fairy photos and Cicely Mary Barker's rather lovely Flower Fairies (I had SUCH a lovely Flower Fairy notelet set once upon a time sigh). There must be scholarly work aplenty documenting this and I am intrigued enough to seek it out if anyone would like to direct me? 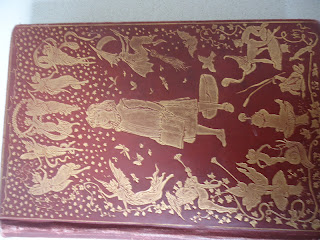 Oo an Elf-Maiden at least (again from Brown Fairy Book) 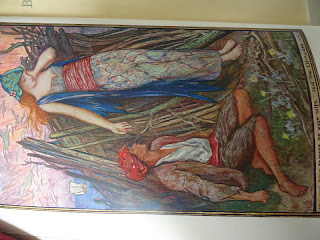 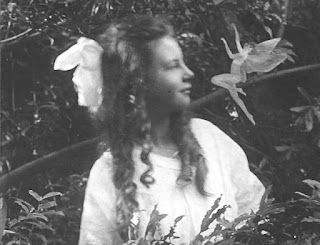 Slightly stretching the definition of fairy out of necessity therefore I'm going to offer you one last solid classic recommendation from the pre-sanitised fairy days of 1872; George Mcdonald's  'The Princess and The Goblin', and 'The Princess and Curdie' favourites of mine from being read to me by my father and top of the pile to read to the boys next.

Now. Again these book could not be said to be fairy packed HOWEVER I think they are worth including in a round up on the grounds that  Irene the eponymous Princess's great great grandmother is a beautiful and magical shape shifting being with powers of enchantment. It is also necessary to believe in her to see her, so although I don't think she's ever overtly labelled as fairy I think we can call her one. She may be slightly on the large side and wingless but she has plenty of the requisite power and grace without any of the tweeness and I think that's preferable. They are at any rate great and magical reads that any Fairy Fan is going to get plenty out of. Plus there are obviously loads of goblins, who I feel must be related to fairies if only rather distantly.

Irene; the Princess and Curdie a miner's son must rescue both themselves, each other, and the kingdom from a series of sorties by the terrifying and acquisitive goblins who live deep in the mountain, and Irene's 'fairy' grandmother's interventions are critical to their success.
They are books which probably pilfer widely from much of the best traditions of folk lore and are fairly well infused with a dose of Victorian sentimentality but nevertheless remain gripping and satisfying reads for both child and adult. A solid recommendation for a Fairy Bookshelf for those who don't require their magical beings too dainty.

'her grandmother was dressed in the loveliest pale-blue velvet, over which her hair, no longer white, but of a rich golden colour, streamed like a cataract, here falling in dull gathered heaps, there rushing away in smooth shining falls. And ever as she looked, the hair seemed pouring down from her head, and vanishing in the golden mist ere it reached the floor. it flowed from under the edge of a circle of shining silver, set with alternated pearls and opals' 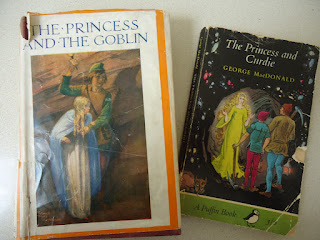 I've taken up enough of your attention so I'm splitting this post in two and present my more modern musterings separately.

'The Princess and The Goblins' and 'The Princess and Curdie' by George Macdonald widely available in various different editions and also as cheap/free Kindle downloads if that's your thing.