Well hurray for first of all this post about dolls houses from Clara Vulliamy, and second of all for the distractions of Twitter preventing me giving my full attention to last night's DVD ('Limitless'- didn't really need my full attention).
Because.
They reminded me Just In Time of the wonderful 'Racketty Packetty House' by Frances Hodgson Burnett; a book not only well sprinkled with fairies but actually WRITTEN by one - the wonderfully named Queen Crosspatch herself. In best fairy fashion it was hiding in a dark forgotten corner of my bookshelf all this time.

First published in 1907 I think I can best describe 'Racketty Packetty House' as Toy Story meets Downton Abbey. Spoilt and neglectful Cynthia has been given a new doll's house; Tidy Castle full of 'all modern improvements' and has no time for her inherited shabby Racketty Packetty House, the once grand and loved toy of her Grandmamma. Racketty Packetty's occupants had originally been dressed very grandly and had grand names to match; Victoria Leopoldina and Aurelia Matilda and Charles Edward Stuart:
'For a long time they led a very gay and fashionable life. They had parties and balls and were presented at Court and went to Royal Christenings and Weddings and were married themselves and had families and scarlet fever and whooping cough and funerals and every luxury. But that was long, long ago.'
Now the renamed Meg, Peg, Kilmanskeg, Gustibus, Ridiklis and Peter Piper have fallen into disrepair and whilst irrepressibly cheerful, spend their days watching the proud new occupants of Tidy Castle leading glamorous aristocratic lives from their new position behind the nursery door. Worse still is Cynthia and her Nurse's threat to burn them and their house together. Peter Piper is the bravest:
'We are only made of wood and it won't hurt a bit. We shall just snap and crackle and go off almost like fireworks and then we shall be ashes and fly away and see all sorts of things.'

The intervention of Queen Crosspatch and her army of fairies will save Racketty House on more than one occasion. There is also a very satisfying love affair across the class divide. And a terrifying outbreak of Scarlet Fever at |Tidy Castle where all the inhabitants are left in a state of high delirium after Cynthia loses interest mid-game. And a visit from a Real Princess. It's packed full of incident as well as warmth, humour and some  great one liners.
'Every one of us is as nice as we can be. We are perfect Turkish Delights. It's laughing that does it.'

The great thing is that you can actually read it Right Now if you choose as it's out of copyright and available on line. Here's the Wikisource link.

And here's my copy, complete with fairies courtesy of illustrator Harrison Cady and my own fairy end paper addition. 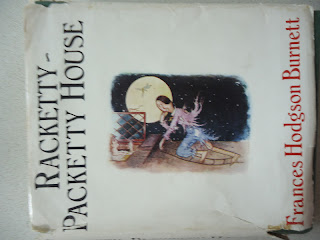 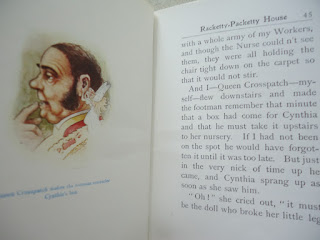 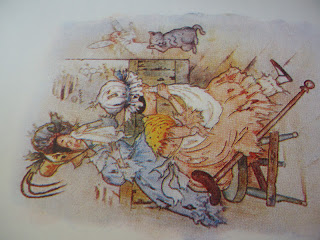 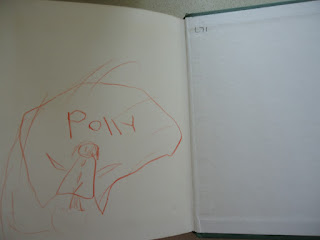