Listen. What's that noise? That's right. Nothing At All.

The Fellow Reviewers have returned to school. There are no explosions, out of control boogying, stick fights or donkeys' braying to be heard. Just the faint twitter of birds. And the distant rumble of the local double decker bus route. And the constant drill and electric saw of the builders putting down new paving slabs outside. Ah blissful peace and quiet.

We had a great week walking in the mountains north of Madrid with Gallido the donkey. The only downside being the difficulty of persuading my children to walk anywhere now WITHOUT a donkey. I am looking into the by-laws on donkey husbandry in suburban back gardens but am not all that hopeful. Memories will have to sustain us. I thought I would do a post or two on our holiday reading/entertainment matter; sharing what I have found useful to pack into a Ryanair baggage allowance to sustain two boys over the course of a week of no in flight entertainment and Only Foreign Telly. I invite you to tell me your secrets too. I will disclose that though my children are (to Bill's great disgust) DS- less, they did have access to my ipad and some dvds to take us through the siesta hours of chorizo and churro digestion. I don't want you to get the idea that we are irredeemably wholesome.

Firstly I give a massive Halleleuia to whoever came up with the concept of Red Fox mini treasures. £1.50 for a classic picture book smaller than a postcard; and loads of titles. Over the years we've built up a reasonable collection of these- but 10 will still fit comfortably into the space taken up by one conventional paperback. For a boy like Eddie who needs his book tower for sleep it's the perfect portable option. Obviously  BIG picture books are best but there can be a curious charm to the scaled down version too. I am very fond of the detail  to be enjoyed in Benedict Blathwayt's illustrations for his 'Little Red Train' series. Even full size there's a fair amount of nose to page contemplation to sustain you, but shrunk to a 6th the size it becomes eye exercise comparable to hand making lace: 'How many pigeons can you count Eddie?' (that will see us through from in flight  snack trolley to scratch card sale walk through).
Be warned they're pretty sneaky though. You buy the mini version cos it's a bargain and then fall in love with the book and buy the full sized version when back at home.

Similarly we have some mini 'Where's Wally?' which came with their own handy magnifying glass. I have to say that's too migraine inducing for me but the boys don't seem to care. 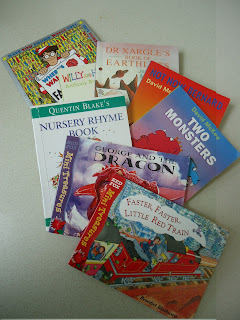