After last week's 'up all-nighter' (or more accurately 'up most of the early-eveninger') with 'Super Animal Adventure Squad' Bill and I have had a week of fairly gorging ourselves on comic/graphic novel fare.

First I made a tentative foray to Gosh, a specialist comic shop in Soho to see what I could forage for us both. This is the husband's territory. He's been making visits there for years, coming back with discreet bags which he then takes down to enjoy in his shed at the bottom of the garden. Occasionally the bags spend some time on the kitchen table first and by long term marital osmosis I have started to absorb some of his enthusiasm and discover some of the more mainstream grown up stuff myself. (hurray in passing for Chris Ware, Daniel Clowes, Craig Thompson, Tom Gauld and Dash Shaw) But you know I was/am a straight laced ballet/pony book girl not a cool comic geek girl. I don't really know what I am doing and the thought of a Proper Comic Shop was a little scary. I envisaged being faced with something like a specialist vinyl shop where pasty Men of Knowledge would turn together and stare at me before returning to obsessive sorting through brown boxes of plastic wrapped back titles and I would have to scuttle away shamed.

But no! It was all good! Gosh has recently moved into new premises in Berwick Street and I have to say they are extremely welcoming for the novice browser. They lure you in with big open glass doors and stacks of ordered loveliness. And they turn out to have a dedicated and beautiful children's section packed full of US import treats which would be hard to get anywhere else. There were stairs at the back leading to the basement; I suspect that's where the Proper Comic Buyers head and the brown boxes might live. I was happy to stick to the ground floor baby slopes for my first visit.

While I was rifling the shelves happily a rather smart and imposing woman came in and asked the assistant in ringing tones for help finding suitable titles for her 11 year old. "He raced through 'Bone' that you recommended last week. Have you got anything of a similar standard of reading difficulty and quality? I want something to occupy him for at least 3 hours please- that looks far too short." The patient assistant made many suggestions. I liked the conflict that was obviously surging within her. 'I don't understand, like, admire or identify with any of these titles but at least he's READING so I'll make the best of it for a minimum of 3 hours of silence.'

So here was my first self-selected kitchen table haul. I thought the assistant had probably had enough helping picky Mamas. 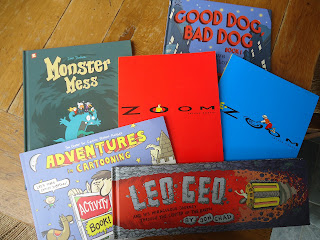 Which have all been more or less devoured now. Probably in about 3 hours give or take but I'm not so picky. Proper reviews to follow.

Not only did I make it to Gosh but I also took the boys briefly to Comiket on Saturday afternoon. We arrived late but just in time to see James Turner do his live drawing of 'Star Cat' which was a thrill for Bill. Here's a rubbish photo of the big screen action. 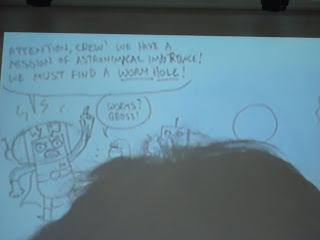 There was quite a lot of watching James Turner's head due to unfortunate light positioning.
We briefly browsed the stalls but Eddie had had enough within minutes, and it was crowded, and I ran out of small change, and I wasn't sure what was going to be kid suitable and what wasn't so we didn't stay all that long. I felt that I might be starting to wade out of my depth. But we did get these (not that we needed an indie comic fair for them!): 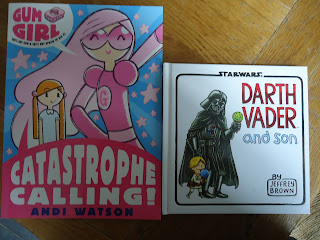 And we met Andi Watson and he signed Bill's 'Gum Girl'. I was quite put in my place about 'Gum Girl' by Bill:
'What do you think Bill? Should we get this or is it too pink and girly for you to read?'
'No mum, just looks cool and superheroey to me. Get it please.'
And he's gulped down that this week too. 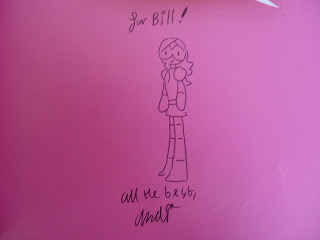 We're really excited to learn that there's going to be a dedicated kids comic tent as part of the Pop Up Festival in June. Our education can continue there. Hell, I may even make it down the stairs at Gosh before then.
So Cool Kids what should we buying next?
Posted by Polly at 11:15

Email ThisBlogThis!Share to TwitterShare to FacebookShare to Pinterest
Labels: comic