So Super Keen readers may recall, that back in the Spring (remember that season of hope and light?... really?... it's the one with the warm globe in the sky and the green shoots in the ground and all being well it's due back soonish) The Fellow Reviewers and I had fun with a book by the Naked Scientists called 'Crisp Packet Fireworks'. This volume of exciting scientific excitements saw me getting drenched with coca-cola in the cause of physics, which pleased mightily two out of the three of us at least.
But the book was out of print. Always annoying but especially so when a book promises to be a long term reference for FUN.

All is not lost however because part of Bill's Christmas book haul was a similar variant on the theme called 'Cool Science Tricks- 50 fantastic feats for kids of all ages' by Daniel Tatarsky and we've had very similar levels of fun with it today.

We have hovered ping-pong balls above a hairdryer, watched different coloured hot and cold water mix and not mix together, persuaded our arms to levitate spookily, played with matches to make water move uphill, put a skewer through an inflated balloon, turned a film canister into a rocket, used our Jedi Mind skills to make a drinking straw rotate and made our own lava lamp.

IT HAS BEEN COOL.

I'd like to say we've all learn't a lot about Science too but to be honest the experiments have enthralled more than the (perfectly clear and well written) explanations: "Yeah, yeah Mum, whatever, still don't really get what a polymer is. What can we do next?"

An excellent little book for a snowy/rainy/poorly day (all of which we have seen rather too many of in recent weeks) of pleasurable indoor diversions. 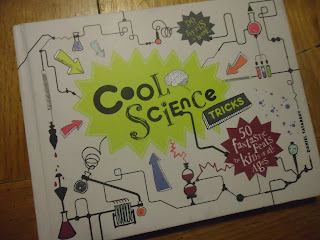 On the back of the book it lists its classification genre as 'Quirky Reference'. I haven't found that section of our library yet but I'm now having fun imagining what other titles it might be filed next to. Maybe; 'How to make your own mini interior zombie apocalypse', something else that we had fun with this week... 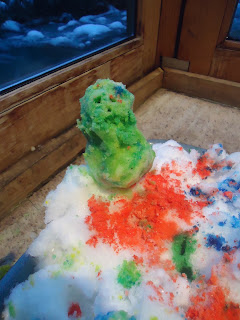