Would you like some Christmassy books then? Oh go'arn. You know you do really.

Bill and Eddie (and me to be honest- my stocking still gets filled) are all firm believers in the Man in the Red Suit. Insomniac Eddie is now officially on detail to see him arrive in the flesh following a triumphant sighting of the tooth fairy this weekend. For Bill, the messages he's received from the rather brilliant Personal North Pole are the clincher- if it's been on the computer it Must Be True (I fear for his future Wikipedia derived essays).

In future posts this month I'll pick out some of my old faithful Christmas stories. We're not efficient enough to wrap a book a day for Advent as others have suggested but we still have our supplies. Advent opening is complicated enough between our broad church selection of calendars representing Wheres Wally, Doctor Who, The Beano and Baby Jesus.

Today I am picking out a couple of new titles I've been sent.

'Dear Santa'  by Kathryn White and Polona Lovsin is a storybook complete with letter writing kit for sending off your own requests to Father Christmas old style if you're finding it difficult to Facetime/Skype with him.

Now I have to admit this is not my favourite- not being that keen on the anthropomorphised animals and the slightly cutesie illustrative style. This comes down to personal taste though- the boy's grandparents often choose them books with this kind of cosy aesthetic; I'm just an edgier kind girl. Also it commits the Cardinal Sin of having penguins at the North Pole which makes me suck breath in through my teeth in a tutting sort of way.

Eddie picked it up straight away, read it and then IMMEDIATELY RAIDED THE LETTER WRITING SET AND WROTE HIS OWN LETTER TO F.C.

Now that may not seem worth all the shouty capitals to you but if you knew Eddie's pen phobia then you would know that that is a very big deal indeed.

and Bill (not worth capitals but still) did the same too. It seems my sons are as much a sucker for a little stationery set with stickers as the next girl. Who'd a thunk it? Sometimes it seems all you want is a bear and rabbit in woolly hats off on an adventure.

Father Christmas may need some legibility help with Eddie's letter(he wants Jabba the Hutt Lego) but I'm sure the elves are good at that sort of thing.

Penguins notwithstanding I have to say thanks 'Dear Santa'. 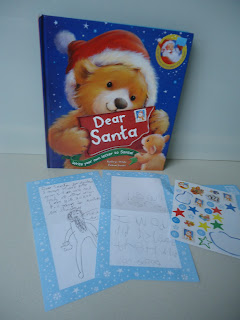 More up my street to read aloud is 'On a Starry Night' a collection of Christmassy animal tales by authors including Michael Broad, Holly Webb and Penny Dolan. For those of us who haven't been efficient with the individual 24 wrapped calendar books this provides a handy get out in providing 10 days worth of Advent suitable reading matter in one volume.

The stories range from the domestic to the myth based and include narwhals and monkeys as well as the more wintry Arctic fox and reindeers and whilst there is a definite bias towards female protagonists this book does not feel too gender niched. There's a satisfying amount of snow and weather within them- and there's nothing nicer to read aloud when you are curled up warm by the fire at home. Personally I love nothing better than falling asleep to a really good Radio 5 phone in about poorly gritted roads and snow chaos. 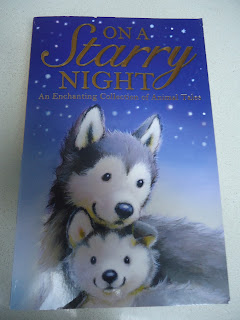 As to the tooth fairy sighting? Eddie states that she was the size of a small apple, with short black sticky out hair, green fairy clothes, a grey wand and a sack full of coins. He provided a witness statement the next day. Keep your eyes peeled; we're worried she may have an untreated thyroid condition in urgent need of medical attention. 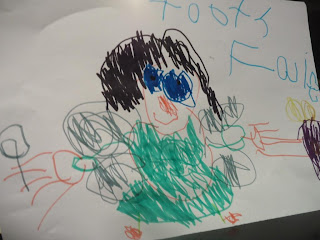 With thanks to the publishers for providing review copies. Our opinions are our own.