Eddie seems to be re-entering one of his periodic phases where he tries to defeat sleep. After bidding him a tender goodnight at about 7.45 yesterday, we became aware of a dramatic reading taking place of his Superhero Squad books filtering down the stairs as we watched 'Downton Abbey' at 9. By the time the ITN news was over at 10.30 and I was ready for bed myself , the dramatic reading had turned into thunderous footsteps running back and forth along the bedroom floor. Intervention was necessary.

"It's really late Eddie, lights need to be off now."
"No! I just love my Lego so much and I need to carry on playing with it."
"Eddie. It's time to go to sleep"
"I am not sleeping. Don't switch out my light and go away"
The only solution at that point was to scoop him up and lie with him until he went to sleep. He lay beside me whispering breathily;
"It's all dark!" (holding out his arms and splayed fingers) "I am full of darkness!" then (somewhat Star Wars influenced) "I have a bad feeling about this!"

Of course having previously blogged about the arbitrary nature of fears, a fear of the dark at some point in your life may be almost universal. Personally, I find even the tiniest chink of light abhorrent when I am trying to go to sleep but I know it wasn't ever so. Plus I do have company in my bed to help fight off any attackers that come under cover of night and Eddie no longer does. I feel for him; Bill loved to share his room with Eddie whilst he was plagued by such fears and then promptly abandoned him when he'd outgrown them. He was finding the late night dramatic renditions of favourite books a little distracting in his own quest for sleep.

I may need to bring out Jill Tomlinson's classic 'The owl who was afraid of the dark': A soothing hymn to the different  pleasures that can only be found at night. Out of the library at the moment though we have Joyce Dunbar's 'The Monster who ate Darkness' illustrated by Jimmy Liao and it's also a goody.

"Now there was no more darkness.
There was no dawn and no dusk.
There were no shadows and
hardly any dreams.

There was only light.
The stark and staring light."

The problems this causes to both the natural world and to Jo Jo himself are beautifully elucidated. The now enormous and lonely monster returns to comfort Jo Jo and the darkness slowly seeps back to its proper homes.
I love Liao's monster, who manages to convey much of the scary/cozy dilemmas of the dark itself. Generally the book's balance between mystery and humour is nicely weighted in both text and illustration. It is a comforting book. 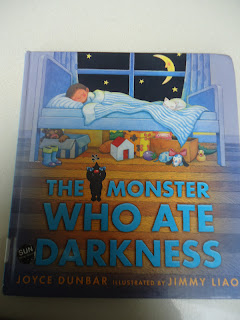 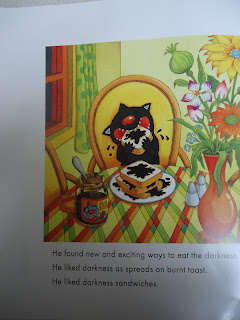 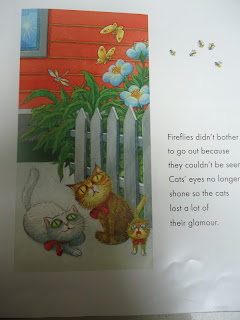 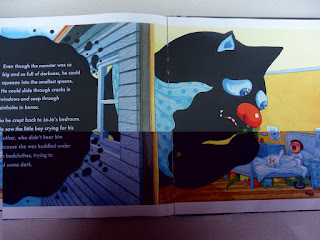 The only trouble is I think Eddie identifies more with the monster than with Jo-Jo...