Having opened the subject of Mr Bill's current preferences in yesterday's post I will continue today.
I first reviewed the totally marvelous 'The Phoenix' comic here when it was all of three issues in. All I can say is if you haven't caught up with it yet and you have kids between the ages of 7 and 12 then what are you thinking of? It's totally marvelous. Every Friday Bill comes in from school, races over and dives headfirst into it and remains submerged within its pages until his stomach reminds him of the need for toast. It takes something pretty powerful to divert him even temporarily from toast. Something totally marvelous in fact.
At the moment they're running a 'design the cover' competition with a subscription up for grabs as the prize. You can find out more and download the template on their website- which I was about to link to but it seems to have gone doolally this morning. Bill has currently designed about 8 different covers including 'Death Fighter', 'Anger Man' and 'Dark Doom'. His Goth phase can't be far off.

One section that features in The Phoenix weekly is an excerpt or short story from a published book; a useful source of inspiration for me but not normally the most interesting part for Bill. A couple of weeks ago however there was a double spread from Chris Riddell's 'Alienography' and it completely captivated him (along with a cracking good cover of Riddell's trademark crazy detailed monsters). His indulgent mama therefore decided to treat both him and herself to  the Book Itself; a reasonably substantial investment at £15 but worth every penny for the pleasure it has only just begun to give us.

There were a few books that lived in our loo when I was growing up and that I read and reread both in that room and outside it. There were two 'Goodies' books/annuals and a book by Michael Palin and Terry Jones called 'Bert Fegg's Nasty Book for Boys and Girls'(I still have the latter- shh don't tell my brother- it's got his name inside). They were very funny, irreverent, complex, a bit rude and perfect to dip into and expand my  mind in all sorts of suitable and unsuitable ways.
'Alienography' reminds me of them; it's full of in-jokes about science fiction most of which pass over Bill's head at the moment but it's also full of fun and detail which he absolutely 'gets'. There are giant flaps, books within the book, even a set of mini robot top trumps to enjoy and plentiful silliness and inventiveness. There are aliens of every conceivable colour, variety and temperament; from the Flurrghs; who turn their enemies into fluffy earmuffs to the Ummmms who can remove earwax from the other side of a room with their tongue. Mainly of course there is just the extraordinary illustrative talent of Chris Riddell to gawp at and inspire further furious scribbling of Bill's own. Beautiful silliness is the best variety.

He's been turning to this book and exploring chunks of it with great pleasure and much giggling and sharing it with his friends since we got it. My hope and expectation looking at it though is that he will still be doing that in five years time and still finding new pleasures and new funniness. A very strong recommendation for any hard-to-buy-for child or sulky tween/teenager who needs a funny bone poke, one entering their Goth phase for instance. Or for anyone with a new loo and an empty shelf. 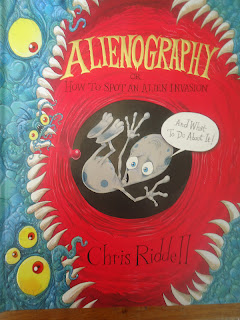 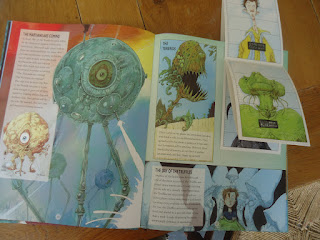 Anyone else remember this? 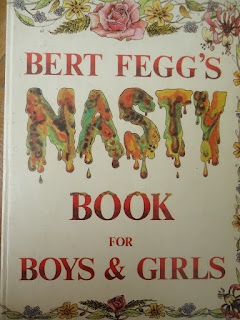 Dark Doom (run for your lives) 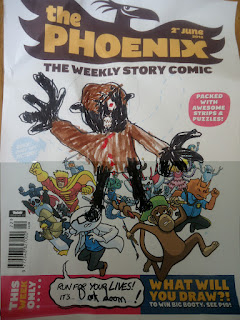