The Edible Book Festival has come to a close and the winners have been announced and....and...!

It was a pretty much impossible task given the quality of the entries; all of the 74 were in with a shout frankly. The first prize went to an incredibly detailed and beautifully crafted version of Emily Gravett's 'The Odd Egg' with definite wow factor. Congratulations to all the prize winners; 'good bake' as Mary Berry and Paul Hollywood would say.

'Owl Babies' by Martin Waddell and illustrated by Patrick Benson  has always been a favourite in this house. Firstly owls are amongst my favourite and my best; who doesn't love an owl? This, extremely large in the stoneware flesh, one was always my first choice exhibit on regular childhood visits to the Fitzwilliam Museum in Cambridge. 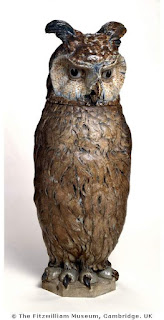 And then one of the main characters in 'Owl Babies' is called Bill and, as we know from my last post, namesakes are always a good shortcut to garner popularity.
But 'Owl Babies' doesn't need any gimmicks to make it a lovely read...and probably doesn't need any introductions from me to you either. It's a quiet classic that has almost certainly found its way into your home already. A proper snuggle-down-and-listen bedtime story to soothe separation anxiety and give a great excuse for some extra mum cuddles.
Three baby owls wait for their mother to return from her night's hunting in a dark wood. As their bravado wanes and the wait seems longer, they huddle together for comfort. Sibling dynamics are beautifully observed from big sister superiority to little brother vulnerability but ultimately the family are united against whatever might  lurk in the darkness.
Mother owl returns; "and she came!", tension dissipates and cosy order is reinstated. The very gentlest of first scare stories for the under fives.
I decided to attempt the cover for the edible book festival partly on the basis that I couldn't find any intimidating versions of it online already and partly because I had a sudden inspiration that I could make them out of cupcakes. This had the advantage of not requiring to much engineering on my part and also we had a school cake sale coming that afternoon so I figured I could just sprinkle them with smarties and sell them anyway if it all went horribly wrong.
It turned out to be fun! My plan to use the orangey bit inside a jaffa cake to make the beaks didn't quite work out as planned but otherwise industrial quantites of buttercream icing hid a multitude of sins. I was particularly proud that the owls genuinely looked a bit scared when I had finished.
As well they might. Taking them to the school cake sale to be torn apart in a flurry of feathers by a hundred grabbing hands made me feel a bit queasy; enough to turn one into a vegecakeatarian.: 'Owl Babies- Version X Rated- When The Mother Didn't Come'... 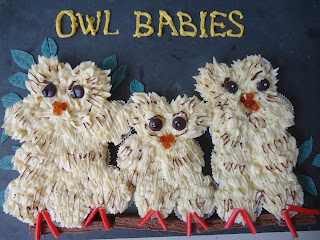