Half term and lucky-devil-away-gallivanting husband dictates ready meal and another quick post tonight.

Despite their 'for the girls' reputation traditional fairy tales have always been very popular in this house. So has Nick Sharratt. The two in combination are pretty irresistable. Following a trip to the Puppet Theatre yesterday to see Norwich Puppet Theatre's  spooky, back-to-roots production of 'Red Riding Hood' we found ourselves falling into a bookshop once again on the way home and walking out once again (ahem) with a discreet package ('3 for 2'- it would have been rude not to!). 'Asterix and the Olympic Games' and 'Super Diaper Baby 2' were our other 'bargains' but Hilary Robinson and Nick Sharratt's 'Mixed Up Fairy Tales' was what I at least was really after.

One of the wonderful things about acquiring a canon of classics as your literary backbone is of course the opportunity to re-appreciate them as they are endlessly reinvented.
Thus yesterday morning, in preparation for our theatre treat, we ended up reading the pretty trad. Hutchinson Treasury of Fairy Tales version of 'Red Riding Hood' and also Laurence Anholt's Seriously Silly 'Little Red Riding Wolf'. We took the Read it Yourself Ladybird version with us on the bus. The puppet show drew on both Perrault and the Brothers Grimm and had an ending that I'd never encountered before; with two washerwomen performing the woodcutter role of rescue (not to mention Red Riding Hood's escape by way of faking the need for a poo).

Nick Sharratt was where we ended up however- and probably just as well for the prevention of nightmares (the poo was popular but the puppet wolves definitely threatening). This book of split pages allows the retelling and mixing of 12 different traditional tales in ever more inventive- and of course silly ways. We've all been enjoying it since but particularly Master Eddie. Here he is demonstrating (he also demonstrates his efficient but not necessarily charming double nostril nose pick-please avert your eyes):

although he has yet to really get the hang of arbitrary mixing in the manner of his big bro. who finds it hysterical to end all his stories with 'a helping of porridge'. He's right actually. That is pretty funny stuff. Especially if you're marrying Cinderella to it. 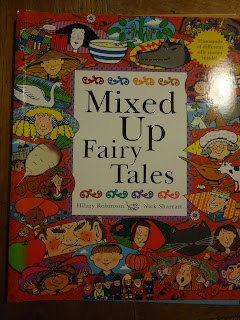