There are few articles more irritating to read than those ones (usually at the back of Sunday colour supplements) where a Supermodel angsts about how difficult it is being beautiful and how she'd rather be much fatter but she just can't put the weight on no matter how much cream she eats. Or a millionaire socialite, never out of the papers, muses how much happier he would be living in a bothy with no sanitation and raising goats.

I worry I may be about to write a post like that. Feel free to throw things at the screen.

Eddie reads too much. It's basically all he does. Well, sometimes he goes for a little run around the kitchen, he sings a bit and he does love to bake and eat biscuits. Other than that he's reading. At nursery they used to sometimes have to close the (hinged) 'book corner' to get Eddie to do something else (being a Montessori nursery the something else was usually polishing silver or window washing- so I can't say I blamed him there). When I go to bed at night, it's not that uncommon to find him still peering through the gloom at one of his favourites, a full 3 hours after I last left him there; enthusiastically 'performing' it with all the voices.

I realise those of you who struggle to persuade your children to open a book may now be feeling the irritation build. 'Sheesh! To have her problems!'. you roll your eyes. 'This is actually just an excuse for Proud Mummy Boasting veiled as a moan. We see your subterfuge.'

I am proud of him. Of course I am- I am his Mum and that's my job. I also worry about him (of course I do- I'm his Mum and that's my job). His reading has come at a cost to certain other skills. He can't/won't draw or write. He can't/won't ride a bike or kick a ball. He's not terribly interested in interacting with his peers. He lives with us very happily, but slightly apart, on Planet Eddie; a planet constructed out of an inordinate number of books.

This is a rather long winded way of getting to today's review I realise- but if I'm going to the core of Planet Eddie- then I want to go back to the book where it all began for him. This was 'Hooray for Fish' by Lucy Cousins (of Maisy Mouse fame).

'Hooray for Fish' immerses you in a jolly underwater adventure through Lucy Cousin's glorious, rich-coloured paintings. It's a book to have big- don't mess around with the board book here. Little Fish swims through the sea greeting all the other fish he meets until he gets to his Mum. The text rhymes and through the variety of fish introduced, various different concepts of opposites or adjectives are taught and visually reinforced.

'Curly whirly, twisty twirly, upside down, round and round.
So many friends, so many fish, splosh, splash, splish!'

Most pages just have two fish on them but there are a few spreads with many more and lots of other funny fish to find including a strawberry fish and a bumble bee fish. I love Lucy Cousin's style. I want to take a spoon and eat it like an ice cream.

This book entered the house probably when Eddie was about 10 months old and had just learned to crawl. And thereafter that was what he would crawl to. He brought to be read umpteen times a day. He turned the pages and poured over it peacefully himself whilst his neglectful mother ran after toddler big bro. He brought it to the dinner table, the bathroom, and to bed. For about a year it was his companion until he'd sucked all the marrow he could from it and moved on to 'The Gruffalo'.

I have since given this book as a first birthday present on several occasions and the feedback I have always received is that it has become a favourite. I'm not sure why, as frankly there are many similar books for toddlers, but there's something almost visceral about this one. It channels into the 1 yr old brain so perfectly, I'd put it on my 'essential' baby reading list. 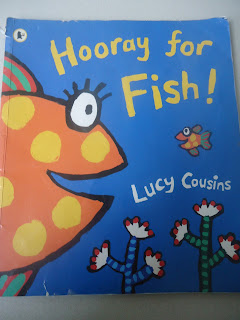 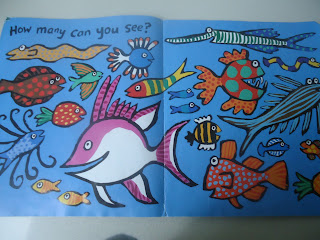 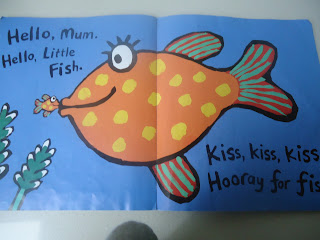 Incidently for those who would like to chew further on the thought that there is such a thing as too much reading for kids I recommend Frances Spufford's 'The Child that Books Built'; a very grown up book, part memoir, part lit. crit that analyses his own childhood retreat into literature.
Posted by Polly at 10:56